Some Perspective: A Lookback at Historical Borrowing

Some Perspective: A Lookback at Historical Borrowing

Interest rates go up, markets go down, and we all get sideways thinking that the world has come to an end. Scanning the news headlines, you would think that these hikes are the most drastic change to our economy since Henry Ford created the assembly line. Here at NavPoint, however, we believe that a little perspective in a time like this can be soothing and encouraging to the frazzled investor.
Let’s first look at the Prime Interest rate—the basis from which the Federal Reserve Bank sets all other rates. Since the early 80s, there has been a sporadic but continuous decline in the prime rate. This produced a good environment for borrowing and a well-stimulated economy. Figure 1, generated from data provided by the St. Louis Fed, shows the ups and downs of the prime rate over the last 40 years.

There has been a tremendous amount of volatility in the prime rate over the last 40 years, but a bird’s eye view shows a constant downward trend. While the recent hike to 5.5% might seem scary, the truth is we’re still a full point below the historical average of 6.5%. It is important to remember: More expensive than yesterday doesn’t mean overpriced. 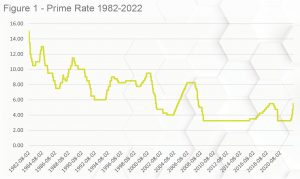 If we examine the 10-year treasury rate and the 30-year mortgage rate over the last 40 years, we see a similar trend in our data (provided by the St. Louis Fed).

Figure 2 and Figure 3 look like the exact same data set. The primary reason for this is the close relationship between the two data points. Both rates have experienced a steady decrease, even more consistent than that of the Prime Rate. These low-interest rates have provided us with a friendly borrowing environment for many years, and they will continue to do so despite the recent interest rate hikes. The current outlook on the economy, investing, and leveraged investment specifically, is extremely poor. The stock market is in a severe slump and the US is in a recession (two consecutive periods of negative GDP growth). But, put in perspective, today looks much brighter than 1982, when rates were pushing 15%.

At NavPoint, we have been closely following the Commercial Real Estate Market’s reaction to the changes and shifts in the current borrowing environment (see our last two newsletters). We strongly believe that the CRE market is poised to do very well over the next couple of years. Rather than seeing the rate hikes as a departure from the good and normal, we see them as a correction away from an artificial experiment of unreasonably low rates. With a new normal on the bottom line, investors and developers alike will adjust their expectations and continue to make the most educated decisions they can. Don’t pull out of the market just yet. Remember what Warren Buffet tells us: “Be fearful when others are greedy, and greedy when others are fearful”.